Twilight and Burger King Team Up! 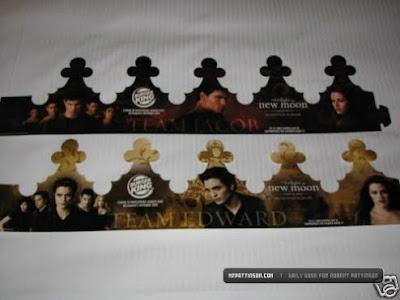 Ever since the Burger King street team was handing out Team Edward and Team Jacob crowns at Comic Con (photo via Robert Pattinson.com), people have been speculating what exactly would the franchise be doing. Frankly, we had visions of mothers wrenching toy Volvo’s from kids meals out of their children’s hands, teens pretending to order a kids meal for an invisible young sibling. Well it turns out the deal is a little different. According to Burger King:
“For fans hungry for another bite of the “Twilight” film franchise, Burger King Corp. is revealing a few details of what will be available in participating BURGER KING® restaurants nationwide this November as part of its multi-faceted “New Moon” promotion. A special gift of holiday value, which guests will receive free (while supplies last) with the purchase of a BK BURGER SHOTS® six pack value meal, will be packed full with “New Moon” merchandise offers, retail coupons and collectible cards. Additionally, a series of limited-edition “New Moon”-themed BK® Crown Cards featuring stars from the film are available for purchase at BURGER KING® restaurants and online at www.bkcrowncard.com. Once acquired, these collectible gift cards, which have a $5 minimum limit, can be loaded at BURGER KING® restaurants nationwide. These exclusive items are just a glimpse of what will be offered in BURGER KING® restaurants and are sure to be a hit with “Twilight” fans looking for hot gifts this holiday season. More information will be revealed in early November when the promotion launches in BURGER KING® restaurants nationwide.
“Curiosity among fans has continued since our exclusive ‘New Moon’-themed BK® Crowns hit the Comic-Con scene in San Diego in late July,” said Cindy Syracuse, senior director, cultural marketing, Burger King Corp. “While full promotional details are still to come, we can confirm that beginning Nov. 16, BURGER KING® restaurants will offer guests access to a number of limited-edition, movie-themed offers and merchandise.”
Repost from Twilight Lexicon
Posted by Carlisle Cullen, MD at 7:46 AM

Carlisle Cullen, MD
ALL ORIGINAL CONTENT ON THIS SITE IS PROTECTED BY COPYRIGHT LAW. USING ANY CONTENT WITHOUT THE PERMISSION OF ITS CREATOR CONSTITUTES PLAGIARISM. © 2009/2010/2011/2012/2013/2014/2015/2016 www.cullensonline.com My name is Carlisle Cullen. I also have gone by Stregone Benefice. I am the patriarch of the Cullen family. My wife is Esme and my children are Edward, Rosalie, Emmet, Alice and Jasper.... (See my 1st blog post for more)